Mary Poppins at the Ahmanson Theater

Last night, I went to see Mary Poppins on stage at the Ahmanson Theatre.


I went with my mom, dad, sister, and my grammy.


My favorite part of the show was when Mary Poppins started to fly into the crowd, and when the man was walking on the ceiling and the wall. They were doing that by having strings on to their shoulders. It was so cool.  My favorite song was " Chim Chimney Chim Chimney".
Below is a picture of the program they gave us when we were going to our seats. 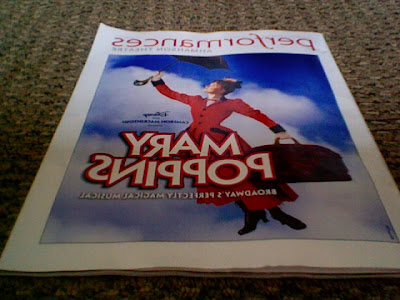 Have you ever seen Mary Poppins in theatre?
Where did you see it?
Did the man walk on the wall and the ceiling, and did Mary Poppins fly?
Posted by Nick at 4:21 PM

Buddy, I am so glad you enjoyed the show. It was great seeing it with you. I wish we could have sat next to each other. We will for sure next time. I love this post. Check out the picture. Am I dizzy?

I enjoyed going with you to the show. Next time we see a stage show I will sit next to you. Thanks for saying you love my posts. Why do I have to look at the picture?

It sounds like you had a lot of fun when you were there! What day of the week did you go there? Also, did it look like they were on strings?

I did have a lot of fun there. I went on a Sunday, and it was last Sunday. No, it didn't look like they were on strings because the strings were transparent.

Thanks for commenting back to me, and I think the Mrs. Yollis would like the word transparent because we were studying the words transparent, and translucent, but I forgot the other word we learned in class. No, I have NEVER been to a Mary Poppins show before.

P.S. Did you notice I used the Html codes Mrs. Yollis taught us?

Thanks for the comment. Yes, I did notice the HTML codes. Ask your mom and dad if you could go see Mary Poppins because it is really fun. If you go tell me and how fun did you have?

Marry Poppins was really fun. Also, it was a really good play. And I also liked that there was two kids just like me and Nick. The best part was when she flew up in the audience at the end of the play.

Thanks for commenting on my blog. Wasn't Marry Poppins fun to see in theatre.