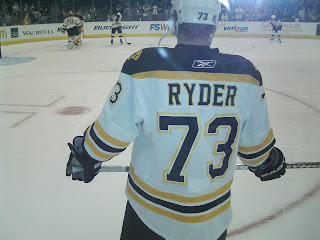 Above is a picture of Michael Ryder. 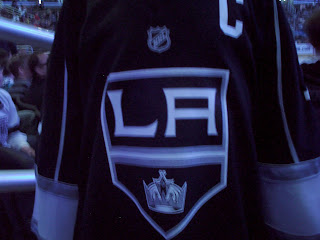 Above is a picture of my Kings jersey. That jersey is called the "Third Jersey". Also, the "C" on the jersey means captain of the team. 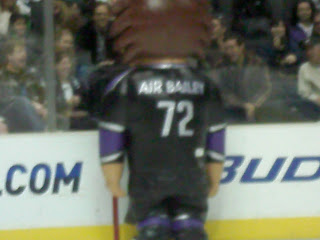 Above is a picture of Air Bailey the Kings mascot.

Below is a picture of Tim Thomas in front of the net, and Zdeno Chara behind the net. 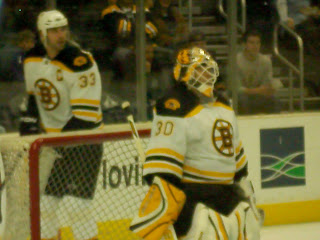 Today I went to a hockey game. The teams were the Los Angeles Kings vs the Boston Bruins. The score was 4-3. The Kings won in a shootout. A shootout is when it's a one on one. The only players on the ice are the shooter and the goalie. I was in row nine with seats 20 and 21.


At the game we saw the tallest hockey player ever. His name is Zdeno Chara, and he is six feet and nine inches. That is so tall. He also holds a record for the fastest slapshot in hockey history. His record for the slapshot is 105.4 MPH. That's amazing!

Have you ever seen the Los Angeles Kings play or the Boston Bruins play?

What was the score?

Have you ever been to a Los Angeles Kings game or a Boston Bruins game?

Another terrific post from you! I like all the photographs you are including in your posts. It really helps readers understand what your are talking about. Also, I like how you only showed the jersey in your King's jersey image. No need to give out too much personal information! Good for you!

Have a great weekend!

Thanks for saying my post is terrific. I tried really hard to get a lot of pictures of Zdeno Chara. Actually he is really easy to spot on the ice. Zdeno Chara gives a high slap shot so if he shot the 105 MPH slap shot it might break the goalies mask. By the way the "Third Jersey" came out last year on the first game.

Have a awesome weekend. See you at school on Tuesday!

Did you have a great time at the game? If I were there I would have a good time.The kings are doing well right? The kings are my third favorite team! Did you know I went to a hockey game before? I wish that you were there.

That was such a great game and this is such a great post. The only thing I like better than going to the Kings game with you is reading your posts. Keep up the great work. I love you.

Thanks for leaving a comment on my blog. Yes, the Kings are doing well in the NHL ( National Hockey League). Also yes I did have a good time at the hockey game. Did you really go to a hockey game before because that would be awesome. Who was playing? Where was it at? What was the final score after the hockey game. Was it a Kings' game? Tell me please. What is your first favorite team what is you second favorite hockey team?

I love all of your posts. You inspire me to blog and comment on people's blogs. I like your hockey player best for all the posts. Please write back.

Thanks for commenting on my blog. Also, thanks for saying you love all my posts.

That sounds like a fascinating game. The shootout was a close one. I saw a Kings game last night, and it was a very close shootout. The score was 3-2 Kings. I have not been to a King game or a Bruins game. How many King games have you been to?

It was a fascinating game. Also, it was a close shootout. I saw the shootout last night too, and the Kings won in the shootout. I have been to about 100 games in my whole life so far.