On Friday night, I went to a concert called Glee Live! It was Universal Studios in Hollywood, and the theatre the concert was in was the Gibson Amphitheater.  Glee is a T.V. show. The show is about this club called the Glee Club. The club is about singing and dancing.


First off, we went to a restaurant called Wolf Gang Puck Bistro. When we were at dinner there was this guy standing a few feet away from the restaurant and he was painted silver and a rusty color. He was like a statue! Also, when someone would walk by him he would scare them because the people walking by him aren't expecting it. He also dances, and when he dances he makes a rusty sound like he is rusty!

Here are a couple pictures of him.
Here is a picture of him standing still. See he is painted silver. 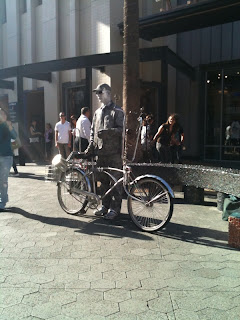 Here he is dancing! 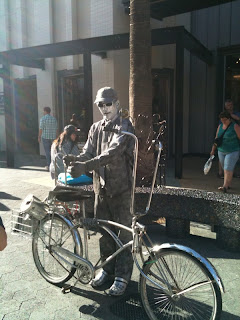 Right before the show I got a poster and my sister, Annie got a poster of Glee. It was awesome!
Before the show started these really good dancers came out and danced for. The are going to be in a movie called the LXD. Actually, one of the dancers from the movie was in the show Glee!
For the concert Glee we sat in row L and seats 101 102 103 and 104.  In my opinion I thought the seats were really good.
I couldn't get any pictures of the show because the said no photos.
They sang lots of songs from the show on t.v. and lots of new ones that are coming on next week's episode.
A couple minutes after the show started I had to put ear plugs in my ears because it was so loud.
The show was about 1 hour and 15 minutes long. Also, there was an encore so they sang two more songs.
In the encore, on of the singers best friend came out to sing, and he is in the show too.
Have you ever watched the show Glee on t.v.?
Have you ever been to the concert?

Great post about your evening out to see the Glee concert!

Terrific writing and excellent use of transition words!

No, I have not watched the Glee t.v. show, but after reading your post I think I will!

I'm glad you are enjoying your summer and, best of all, that you are blogging about it! Great photos, too!

Thanks for the thoughtful comment. It is a really good show. In fact, it is on every Thursday night at 8:00P.M. on Fox T.V.

You are so lucky to go to the Glee show! I have watched the shows on t.v and did a play with my friends. How did you feel watching Glee?

Thanks for the comment on this post. When I watch Glee, I feel like I am at the concert again. Also, have you noticed you can hear Rachel's voice the most when the girls sing. What is your favorite episode?

My family also went to the Glee concert. We sat in the row right behind you. I got a t-shirt that says " I'm a gleek".

The concert was amazing. Who is your favorite character from Glee.

Thanks for the comment! That was a pretty cool shirt, and I know because I saw that shirt before. My favorite character from Glee is probably Mr. Shuster because he directs the whole "Glee Club".